Lattakia, SANA-Upon the directives of Commander-in-Chief of the Army and armed forces, President Bashar al-Assad, Minister of Defense Ali Abdullah Ayoub, visited Hmeimem military base and offered congratulations on behalf of President al-Assad and the army to Russian soldiers and officers on the 73rd anniversary of victory in World War II. 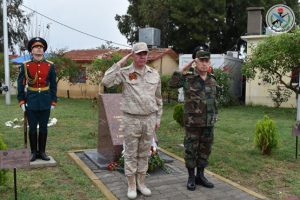 General Ayoub underlined the importance of political and military support provided by the Russian friends to Syria in its war against terrorism and its supporters.

Later on, Gen. Ayoub, joined by Chief of Russian forces in Syria Alexander Jouravlev, visited the Tomb of the Unknown Soldier and laid wreaths of flowers on it while the music of the Russian army was played. They also toured the museum specialized in the activities of the Russian military forces and the strong relations binding Syria and Russia, after which they attended a military parade for Russian and Syrian army units.

On May 9th, Russia marks the anniversary of victory over Nazism in World War II.