Inspiring artworks by children with disabilities in Sweida Sweida, SANA – On the occasion of the Martyrs’ Day, painting and handiwork exhibition by children with disabilities kicked off in the city of Swaida.

The 3-day exhibition was held on Monday at the Arab Cultural Center and brought together 70 children from the Institute of the Children with Disabilities. 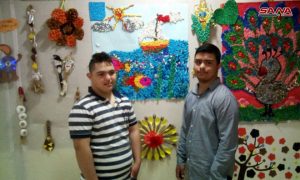 It included three pavilions. The first pavilion showcased artworks for Children over 14 years of age from the vocational department, the second one was for children aged from 4 to 7 years, while the third one displayed works made by children with autism.

Director of the Institute, Manal Abazah, told SANA that the exhibition meant to deliver a message that people with disabilities are capable of doing anything they want like other people. They can work, paint, and integrate successfully in the society.

The event attracted Swieda people who were inspired by those children like Ghaith Blan, Rahab Radwan, and Wael Al Sahnawi. The three children from the vocational section were so happy and proud of themselves.

Maher Amer who is a father of one of the participating children said, ” I am so proud of my son,” adding that such exhibitions are important to develop the cognitive ability for the children with disabilities and to inform the community that people with disabilities has no limitations.