Damascus Countryside, SANA – Throughout the crisis in Syria, a number of factories persevered and managed to maintain production, proving that Syrian industrialists can surmount all difficulties with their resourcefulness despite the economic embargo imposed on Syria. Thanks to these industrialists’ efforts, the “Made in Syria” label remained present in foreign markets in spite of those who wanted to see Syria ruined. 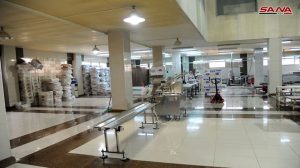 On Workers’ Day, SANA met with some of these industrialists and talked about their experience during the crisis.

Industrialist Mahmoud Khorsheed, who owns an ice cream factory, told SANA’s reporter during a tour of Adra Industrial City that his factory began production in 2009 and hasn’t stopped since, despite all difficult conditions. 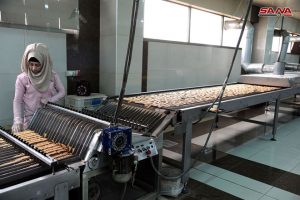 Khorsheed said that the factory’s production covers the local market and is exported to Lebanon, and soon it will be exported to Iraq, Sudan, and Egypt as well.

He pointed out to the government’s efforts for stabilizing and protecting Syrian industry, particularly the Electricity Ministry that worked hard to provide power during the years of the war. 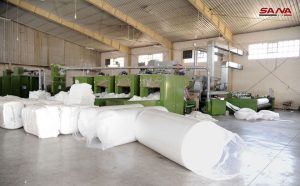 Zenbarakji is a renowned brand locally among chocolate and biscuit manufacturers. Production manager at the company Mazen Ezzeldin said the cooperation and services provided by the Industrial City’s administration allowed the company to maintain production.

Textiles is one of the most prominent Syrian products, and one of the companies that produces them is al-Huda for linens that began work in a small 2500 square meters facility in Harasta in 1987. 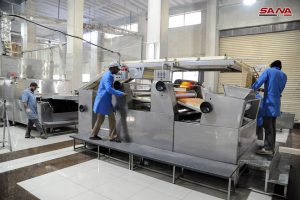 Production manager at al-Huda factory Mohammad Usama Tarfan told SANA that after years of work, the company moved to a 32000 square meters facility adjacent to the Industrial City, equipped with high-tech machines manned by over 600 workers.

Tarfan said that the company’s products won many quality awards and were sold across Syria and exported to many countries, but all this hard work turned to ashes when terrorists sabotaged the area. 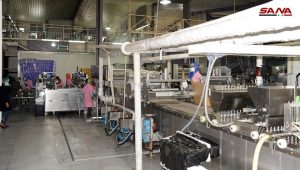 He went on saying that despite the major losses, al-Huda never ceased production, as the company rented a humble facility in Damascus’ suburbs to keep the brand going, then when the Syrian Arab Army secured Adra area, the company rehabilitated 2000 square meters of the old factory and resum,d production there.

Industrialists Jihad al-Esh from al-Kamal company that produces electricity generators said that his company provides generators to companies both in the public and private sector, and even exports its products to several countries.

SANA also visited industrial facilities in al-Sheikh Najjar Industrial City in Aleppo province. After being sabotaged and looted by terrorists, the city resumed its activities after it was liberated by the Syrian Arab Army. 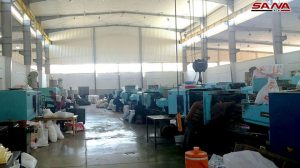 Hassan Zou’a, manager of a textiles factory, said that their facilities were destroyed by terrorists, particularly thread spinning mills whose engines were stolen and taken to Turkey.

Zou’a said that they had difficulties at first following the liberation of the area due to the lack of workers, but things are improving gradually. 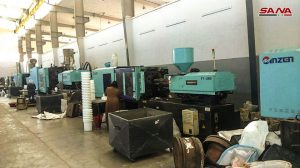 Ibrahim al-Sisi, who owns a plastic production facility, said they now have a very good production output after repairing the facility, while Mu’taz Ayoubi who owns an aluminum factory said there are difficulties related to finding workers and procuring raw materials, but now he is more determined than ever to maintain production.

Owner of al-Qemma factory for food products Omar Oso said he carried out renovations and maintenance to the factory that was vandalized by terrorists, and now it resumed producing tahini, which is an essential ingredient in Aleppo cuisine, in addition to halva.