Talks during meeting dealt with situation in Syria and the important victories achieved against terrorism.

The two sides affirmed the joint will of Syria and Iran to continue to strengthen the strategic relations binding them together, including relations between the two countries’ parliaments.

President al-Assad, for his part, said that the region in general is going through a phase of redrawing the entire international map, adding that the escalation of the aggression against Syria and the fact that hostile countries have 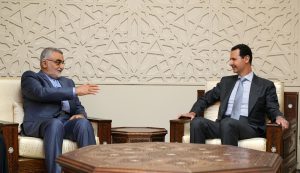 shifted to a stage of direct aggression after the fiasco that has befallen their agents and tools will only increase the Syrians’ determination to eliminate terrorism in all its forms, and uphold their sovereignty and their right to shape their own future.

President al-Assad underlined the importance of parliamentary relations in the exchange of experiences between countries at the grassroots level, not only at the political.

For his part, Boroujerdi affirmed that the project of the US and its allies and their tools in the region was defeated in Syria, indicating that the failure of the recent aggression underscores the solidity of the resistance axis and counterterrorism.

He stressed that Iran will remain, as it has always been, staunch in its support for Syria, vowing to keep up efforts aimed at achieving a political solution determined by the Syrians that preserves the unity and sovereignty of Syria. 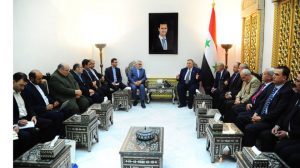 Sabbagh affirmed that Syria and Iran are partners in achieving victories against terrorism and in the process of reconstruction, while Boroujerdi said that bilateral relations are strong and prospering, particularly since the two countries will sign a strategic document for cooperation soon. 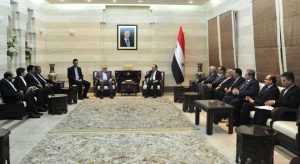 Prime Minister Emad Khamis also discussed with Boroujerdi and the accompanying delegation means of boosting strategic ties and broadening aspects of economic and trade cooperation between the two countries.

Khamis underlined that the government is keen to apply all economic agreements signed between the two states as scheduled and open new prospects of cooperation in different domains of economy, trade, agriculture, tourism, railways and navigation.

Boroujerdi, for his part, stressed the importance of holding businessmen assembly in Damascus and Tehran and activating tourism.

He considered that the victories Syria is witnessing paves the way for a new economic prosperous era. 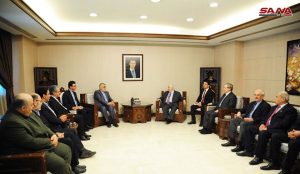 In the same context, Deputy Prime Minister, Foreign and Expatriates Minister Walid al-Moallem met with Boroujerdi, discussing bilateral relations and means to develop them, in addition to regional and international developments, particularly the US-British-French aggression and the recurring Israeli aggressions against Syria.

Boroujerdi said that the tripartite aggression is a blatant violation of international law and norms, and affects stability in the entire region.