1,146 terrorists evacuated from Douma to Idleb, News on agreement on exit of “Jaish al-Islam” terrorists to Jarablos Damascus, SANA- Hundreds of “Failaq al-Rahman” terrorists and their families were taken out of Douma city in Eastern Ghouta to Idleb on Sunday  evening in parallel with information on reaching an agreement for having “Jaish al-Islam” terrorists exit Douma to Jarablos.

A military source said that 1,146 terrorists of “Failaq al-Rahman” and their families have been evacuated aboard 24 buses from Douma through al-Wafedeen Camp corridor to Idleb. 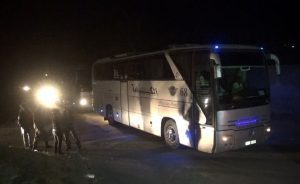 The source added that a number of buses and vehicles left on Sunday evening under the supervision of Syrian Arab Red Crescent towards Idleb after that terrorists and their families were taken out of Douma city.

This comes less than 24 hours after the Syrian Arab Army declared the towns of Zamalka, Erbin, Ein Tarma, and Jobar clear of terrorism after the exit of all terrorists and their families from them to Idleb.

More than 41,000 terrorists and their family members exited Eastern Ghouta during the past 8 days.

SANA correspondent said that an agreement was reached to have Jaish al-Islam leave Douma and go to Jarablos, while those who remain will have their legal status settled and the state establishments will return in full to Douma city. 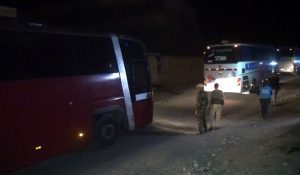 The agreement also stipulates for the terrorists to turn over all civilian and military abductees and the bodies of martyrs, along with handing over their heavy and medium weapons to the state.

The submission of “Jaish al-Islam” terrorists came due to the accelerated successive victories achieved by the Syrian Arab Army in its wide-scale military operations to liberate the Eastern Ghouta.