“Made in Syria” exhibition in Benghazi Al-Halabi: “Made in Syria” exhibition in Benghazi witnesses a huge turnout

Commemorating the 39th anniversary of the victory of the Islamic revolution in Iran, the 4-day exhibition showcases 40 artworks which vary between calligraphy, graphics, caricature and calligram. 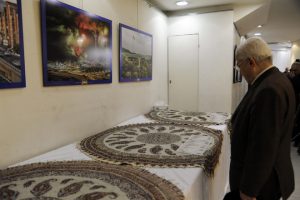 In a statement to SANA, Head of the Plastic Artists Union Ihsan al-‘Ar said that the majority of exhibited artworks reflect the Iranian cultural identity represented by the Persian calligraphy, in addition to other exhibits and paintings depicting the close Syrian-Iranian relations in all fields.

He noted that a cultural symposium will be held within the next two days during which Syrian and Iranian artists will speak with special focus laid on the Iranian art.

Iranian caricaturist Ahmad Reza Beyzaei expressed happiness to be in Syria and take part in the exhibition.