Tehran, SANA-Speaker of the People’s Assembly Hammoudah Sabbagh discussed with the Iranian Foreign Minister Mohammad Javad Zarif means of upgrading bilateral relations and the latest developments in Syria and the region.

During the meeting held on the sidelines of 13th edition of the Parliamentary Union of the member states of the Organization of Islamic Cooperation (PUIC), Sabbagh said that the field victories of the Syrian Army against terrorism should be accompanied by political and diplomatic victories, adding that “it is not allowed for enemies to gain through politics what they had failed to do on ground.”

“Whenever we defeat terrorism the Zionist entity launches an assault on Syria, and that reflects its close ties with terrorism,” he added. 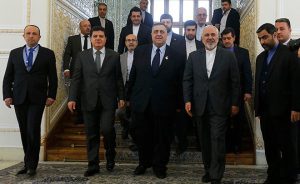 Sabbagh pointed out to the importance that Iran, which is Syria’s partner in achieving victory on terrorism, be a partner in the political solution on different tracks that would be posed in the upcoming stage, adding “we need an Iranian partnership in a way that would be of benefit to the Syrian and Iranian peoples.”

Minister Zarif for his part said that the resilience of the Syrian people and the support of the allies and friends are the base for achieving triumph on terrorism, pointing out that the U.S. and the Zionist entity constantly attempt to give the terrorists doses of hope through launching new assaults on Syria.

He condemned the U.S.’s forming of armed militias in northeastern Syria, considering it as “a highly critical issue that we should cooperate on solving before it transforms into a grave danger on the Kurds and other residents of the region.”

“I share you the opinion that the military victories should be accompanied by political achievements…our cooperation with you and the Russian friends in Sochi will come up with good results,”Zarif said.

Sabbagh and Velayati: Syria, Iran to boost coordination to foil plots targeting them

Speaker Sabbagh and Iranian Supreme Leader’s top Adviser for International Affairs, Ali Akbar Velayati affirmed the need to continue coordination and consultation between Syria and Iran and to work together in various fields to thwart the plots that target both countries and the whole region.

Sabbagh, during a meeting held on the sidelines of the Conference, said that “Syria’s field victories over terrorism came as a result of the sacrifices of the Syrian people, the wisdom of the Syrian leadership and the support of the allies,” stressing the importance of bilateral coordination to foil plots and reconstruct Syria after the end of the war. 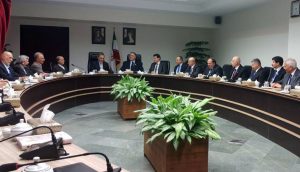 He added that the two countries will continue cooperation to make the political process a success and to push the economic wheel forward.

Velayati, in turn, asserted that his country supports Syria in the fight against terrorism, adding that Tehran will not allow any schemes to affect Syrian sovereignty, describing the Syrian-Iranian relations as strategic, whether at time of peace or at war.

The US stances against Iran are reaction to the defeats in Iraq and Syria, Velayati said at a joint press conference with Sabbagh, adding that the plots of the enemies in the region have failed as much as the Americans failed to divide Iraq or create chaos in Iran and Syria.