Damascus Countryside, SANA – Some 24 abductees including women and children, who were kidnapped by armed groups in Erbin area in the Eastern Ghouta, have been released on Tuesday.

This came as part of the efforts by the Syrian Arab Red Crescent (SARC) in coordination with the authorities to evacuate the critical cases from the areas where terrorist organizations positioned.

Speaking to SANA, a number of the liberated persons said that they were kidnapped from al-Abbasiyyin bus stop and held hostage for periods ranging between 8 months and 3 years. 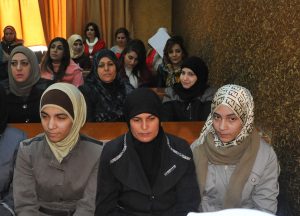 them back to their towns and homes, adding that constant contact is being made with more than one side to preserve the lives of the abductees and free them, and that 2018 will witnesses a lot of victories and achievements in this regard.

He added that the terrorist groups have burned and confiscated all the ID documents of the liberated persons, stressing that they will have alternative documents soon.

Hundreds of abductees, the vast majority of them children and women, are detained by the armed terrorist groups in Eastern Ghouta, and these groups also besiege thousands of civilians and use them as human shields, in addition to stealing large amounts of humanitarian aid provided by the SARC and other international organizations for civilians.